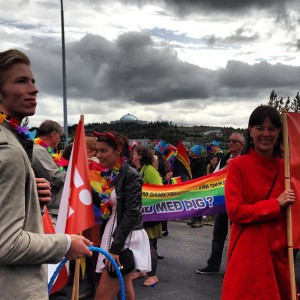 On Friday, Ireland will vote whether to legalize same-sex marriage in what the government’s equality minister called “a referendum like no other.” Let’s hope Saturday will be a happy day and we can celebrate!

One of the things that make me proud of being Icelandic is that the matters regarding LGBTQ rights are quite progressive in Iceland. Gay people can marry in church and same sex couples have had equal access to adoption and IVF since 2006. The first openly gay prime minister, Jóhanna Sigurðardóttir, was elected in Iceland 2009 and the former mayor of Reykjavík, Jón Gnarr, dressed up in drag for The Gay Pride Parade in 2011. The Gay Pride Parade is a huge event in Reykjavik every year, with around 35 thousand Icelanders participating.

Unfortunately, bullying of queer students in Icelandic schools has been increasing, which is obviously a big problem. However,  if all goes according to plan, the students at the Faculty of Teacher Education at The University of Iceland will soon be able to take a course in queer studies as part of their education. Hopefully it will be a part of the curriculum of the University in the school year 2016-2017. Here you can read all about it!