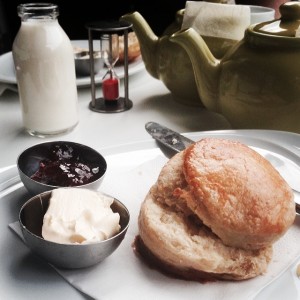 When it comes to traditional British food, I’ve promised myself to try everything at least once. Marmite. Yeah, once was enough. Cream tea on the other hand is something a lady must have regularly. Good thing I’m not a lady then, ’cause it‘s really rich and leaves you feeling like a stuffed puffin. Tastes good though, can‘t deny that.

The reason it‘s called cream tea is not that they pour cream into the tea. Cream tea is a combination of a scone with clotted cream and jam and a cup of tea. However, Cream tea should be served with milk. It got its name from Devonshire cream, or clotted cream as it‘s usually called, produced in the county of Devon. The texture of clotted cream is somewhere between whipped cream and butter and it is not as light as whipped cream. It‘s a bit like what you get when you whip the cream too much.

Fun fact. It matters to some people whether you spread the clotted cream or the jam beforehand. This has been the subject of a long standing rivalry between Devon and Cornwall. In Devon, you traditionally spread cream on the scone first, then you top it with jam. In Cornwall, it‘s the opposite. Jam first, then cream. I’ve tried both methods and haven‘t been able to decide which is better myself, so I’m not taking sides.

The debate doesn’t end here though. They can’t even agree on whether the pronunciation of the delicacy should be “skoan”, or “skon”. So what do you think? Clotted cream or jam first? Skoan or skon?